BATTLESHIP
Back to Game Library

MAN YOUR BATTLESTATIONS TO SINK THE OPPONENT!

BATTLESHIP, a timeless 2 player game, set on the open ocean as two fleets go head-to-head in an epic battle.

Make strategic guesses and fire upon the opponent in hopes of a direct hit.

Sink and destroy the opponents full fleet to win the war.

AN EXPLOSIVE INTERACTIVE VERSION OF THE CLASSIC STRATEGY GAME:

Each player strategically positions their fleet

Players take turns firing shots at each others ships

A fog covers the sea battleground. Firing on a particular space will clear it and reveal a MISS (WHITE PIN) or DIRECT HIT (RED PIN).

• To sink a ship you must HIT every space the battleship occupies.

• The battle is won when a player sinks all FIVE (5) of the opponent's battleships. 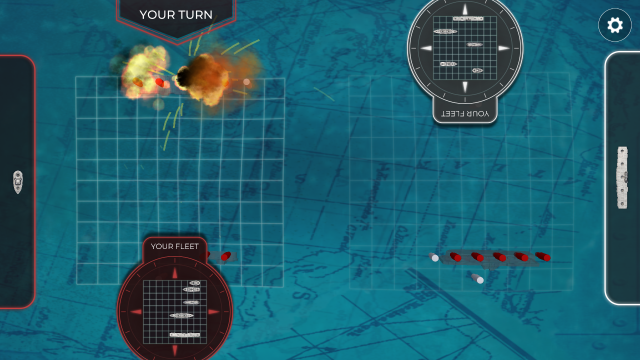 GO INTO BATTLE WITH THESE STRATEGIC HIGHLIGHTS:

• Dynamic and engaging game board

• Designed and optimized for the Infinity Game Table

• The gameplay has been designed like a tightly run ship, everything is in order, and players just need to be strategic and start firing! Hey, "you sunk my Battleship!"

BATTLESHIP is a trademark of Hasbro and is used with permission. © 2023 Hasbro. All Rights Reserved. Licensed by Hasbro.